Everyone faces obstacles in their life. These three local families have proven that obstacles do not have to be burdens to carry, but rather can create opportunities to connect with the communities around them. And in each case, the communities throughout Berks have unfailingly reached out to lend a hand when they needed it.

In August of 2018, after two months of being treated for gastrointestinal issues, 10-year-old Celia Cosentino was diagnosed with a rare form of brain cancer. Throughout her grueling 310-day treatment regimen and ongoing therapy, the Wyomissing School District and community rallied behind her and her family.

310 Days
Following her diagnosis of a central nervous system ganglioneuroblastoma, Celia started a challenging year of treatment. She had one resection surgery and five rounds of five-drug chemotherapy, followed by another three rounds of high-dose chemotherapy and stem cell rescue. Celia then spent the rest of the year at Children’s Hospital of Philadelphia (CHOP) undergoing 30 rounds of radiation. Her mother Sara shares that, “the first three months were horrible.” Celia was understandably down, but her family soon started to see a change in her. “She would get sick, and she would be miserable, and then she would move on. When I asked her about it, she said, ‘I just decided that it’s better to be happy than angry.’ And from that point on, that is the attitude she has taken. To me, that’s the most inspiring thing.”

#LoveForCelia
Throughout her treatment and recovery, Celia has inspired the community, rallying support from friends and strangers alike. “People who didn’t even know Celia were throwing their support at her in a very visible way,” Sara says. “There were a lot of people out there who wanted to see her beat this, and it kind of propelled us forward.” It started with Celia’s daily battle song, which Sara would post to Facebook each day. The #LoveForCelia Facebook group filled with videos and messages from friends and classmates. Wyomissing Hills Elementary even produced a full-length fight song for her at Christmas. Her friends and classmates weren’t the only ones to reach out. The Cosentinos are a Laney’s Legacy of Hope fighter family as well. “In the beginning I turned down a lot of help, until Jen Brown finally said they were going to help us anyway,” Sara admits. “They really did a lot for us financially, and they made themselves available for emotional support when I needed it. They’re just an incredible organization.” Mike Fitzgerald and Lauren’s Foundation also got involved in Celia’s fight. “I turned him away too, and he helped us anyway,” Sara says.

The Fight Continues
Today Celia’s tumor is dead, and she is trying to get back to life as usual. She has rejoined Girl Scouts; her troop is currently working on their bronze award by making care kits for the children’s oncology center at Hershey where Celia received most of her treatment. She has also returned to doing schoolwork in the mornings and attends physical and occupational therapy in the afternoon. “In the past few months, she has just made leaps and bounds. Six months ago, she wasn’t walking and now she’s running and dancing. She’s making incredible strides, and it’s all her own doing, her determination,” says Sara. The more progress she makes, the more the family wants to share her story. “I was pretty quiet during Celia’s treatment, but now that she’s done with it, I’m not. I try to give very honest views, all those down and dirty ugly things about childhood cancer. Especially the fact that it is absolutely ridiculous that pediatric cancer is only allocated 4 percent of all cancer research funding. It’s disgusting.” Sara has spoken at both local and Penn State THON events this year and has started organizing drives to benefit Hershey Children’s Hospital. They have already donated nearly 80 fuzzy blankets and 700 books and are planning more drives this summer. “Hershey and so many other organizations have done so much for us, and we so desperately want to keep paying it forward,” Sara says. 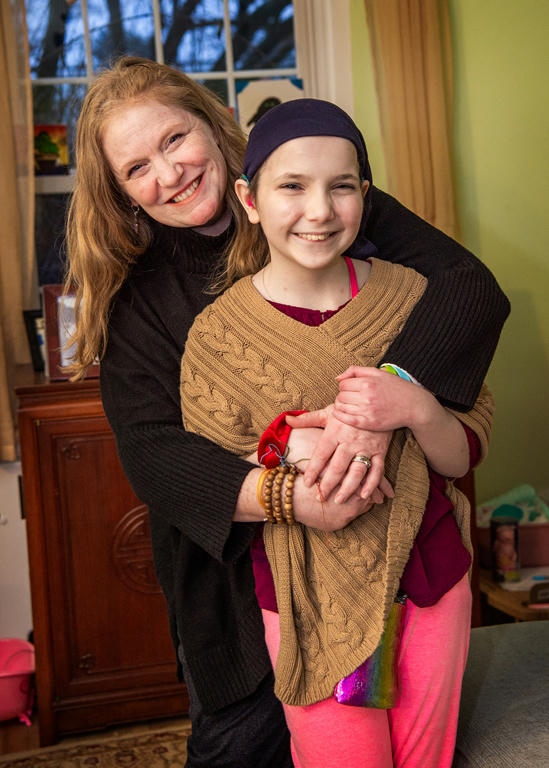 On July 19, 2019, 11-year-old Melvin Parker’s life was changed forever. But his positive attitude and fighting spirit have made him a beacon of inspiration to his community.

Wrong Place, Wrong Time
Melvin was out with his mother, Ty, getting a haircut before their trip to Hershey Park the next day. While Melvin was in the barber’s chair, Ty went down to the corner to get him lunch when two men walked into the store. “You could just feel their demeanor. Something about them just wanted a problem,” Ty recalls. After an altercation in the store, the men were waiting outside. “We couldn’t even get down the steps from the store. They just wanted to argue,” Ty explains. She extracted herself and hurried back to Melvin. “The moment we got in the car I saw them pull up. Then there were just so many shots flying our way. I immediately turned back to Melvin and realized he wasn’t ducking. By the time I could grab him he had already been shot.”

A stray bullet hit Melvin in the face, severing an artery. The emergency staff at Reading Hospital stabilized him, but his injuries were so severe that they flew him to Penn State Hershey Children’s Hospital, where he immediately went into surgery. The surgery saved his life, but he suffered a stroke, leaving the right side of his brain completely dead.

Muhlenberg is Melvin Parker STRONG
To date, Melvin has undergone five major surgeries and still faces several procedures and extensive therapy. “He’s learning to move his left arm and leg again. It’s just going to take a lot of time and patience for him to get back to normal, or as normal as he can get back to,” Ty says. After months of back-and-forth between Hershey and Lehigh Valley Children’s Hospital, he was released to Good Shephard Rehabilitation Center in Bethlehem in November. “They absolutely love him there,” Ty shares. “He’s always ready for therapy, always ambitious. He’s really come a long way.”

It’s not just the hospital staff who have been charmed by Melvin’s fighting spirit. “The school and community have been 100 percent behind Melvin all the way. It’s amazing how much he is really loved,” Ty says. After the accident, Muhlenberg School District and township joined to organize the Lil Melvin STRONG vendor carnival. The entire community came together to show their support, to raise awareness and to collect donations. His school, C.E. Cole Elementary, also started hosting Melvin Mondays for classmates and teachers to unite and create video messages for him. They have also organized countless fundraisers, including the sale of “I’m so Melvin Parker STRONG” t-shirts. Ty is still learning about all the drives that were organized on his behalf from the first months Melvin was in the hospital.

Planning a Homecoming
While it’s still unclear when Melvin will be cleared to return home, he remains positive. “His spirit is so awesome; he’s so optimistic. Even before this there wasn’t anything that could bring Melvin down,” his mom says. “I see how well he’s taking it, and it keeps me strong. He’s so positive about his situation. The only thing he talks about is his friends and going back to school.” When the time does come for Melvin to get back to school, the City of Reading and Muhlenberg Township will be ready for him, and plans for a welcome home parade are already in the works. 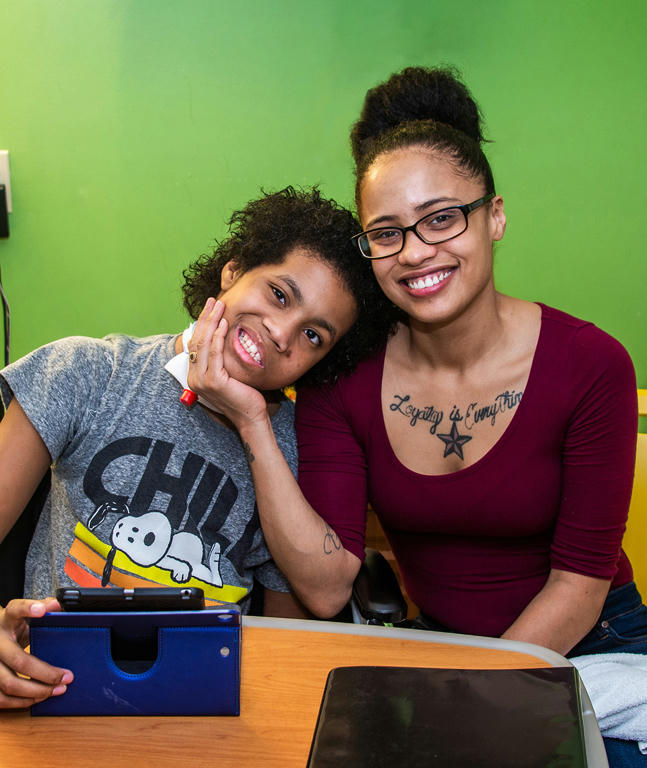 According to Genine Bashore, the real obstacle her family faced was getting an autism diagnosis for her son, Jake. “We don’t see autism as an obstacle, we kind of see it as a blessing. This isn’t some burden we’ve had to carry. It’s just the road we’re walking down and seeing what we can do to make it better,” she explains. That road has given Genine and Jake an opportunity to connect with the community, and he has become somewhat of a local celebrity along the way.

The Fight for a Diagnosis
Autism research has come a long way since the Bashores started looking for answers. After two years, two pediatricians and a developmental psychologist, Genine found herself at Penn State Hershey Children’s Hospital where Jake was finally diagnosed. “It took us two years to get an autism diagnosis for him, which I had to fight for,” Genine remembers. “I wish I could say I was the only person who had to go through that, but most moms of kiddos his age had to fight like that.”

Jake started therapy in their home for 40 hours a week, but Genine wanted to make sure that he learned to apply that behavior out in the world. “It was important to us that he be able to live a life outside of the house. We wanted to be able to go to dinner, to go on vacation. So there were times that he was made very uncomfortable, because the world was not going to transform for him.” The family worked on everyday tasks like waiting in line, going out to eat and, eventually, travelling. Jake took his first flight last year to celebrate his 21st birthday in Las Vegas.

Getting Connected
After Jake graduated from Schuylkill Valley, the family moved to Virginia, but after only 17 months, the Bashores were back in Berks. “We ran like we were on fire back to Berks County,” Genine says. “Now I find myself defending Berks, and especially Reading, because I think people don’t understand how it is in other places. We moved back here in May, and we have accomplished so much to the accolades of this county and all the people who have embraced what we are doing. I don’t know that we could have done this anywhere else.” Part of the problem was a lack of volunteer placements, but there is no shortage here in Berks. Jake has worked with the Berks Encore Friendly Visitor and Grocery Delivery programs, and he now has a regular route with Meals on Wheels on Wednesdays and packages meals on Thursdays. “Berks Encore is great,” Genine says. “They’ll just slide him [in] where it’s appropriate with no questions asked and no strings attached.”

Cookie Break with Jake
Autism awareness has come a long way since Jake was young, and Genine and Jake are doing their part to increase exposure to the autism community. That was the inspiration for Cookie Break with Jake. Jake has always loved to bake; his cookies were famous among his teammates on the Schuylkill Valley swim team. When the family returned to Berks, Genine decided to use that passion as a way to connect Jake to the community and to fill some gaps in their volunteering schedule.

Each week Jake bakes his famous chocolate chip cookies to take along on field trips. They’ve visited restaurants, disability services centers and even the Pennsylvania War Horse Therapy Center. “It’s so cool to see and so fun to get him connecting with people,” Genine says. And of course, the cookies are very well received. “We’ll give you a little bit of a secret. We don’t use just one kind of chips; ours is a blend of three different chocolate chips. What’s the secret ingredient in our chocolate chip cookies, buddy?” Jake’s response was simply: “Love.” 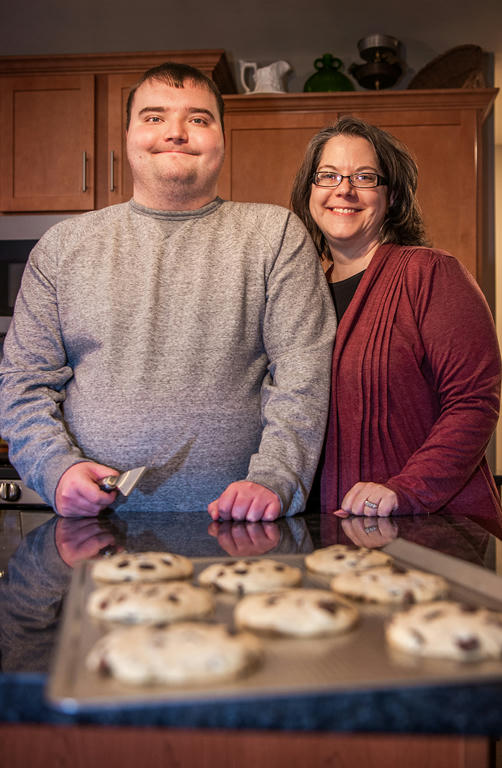